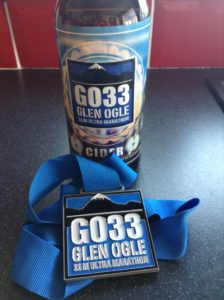 So I have completed my first Ultra and I have the aches and pains today to prove it, my ultra journey has been a slow burner with everyone saying I would do one but I always declined until one night a combination of Peroni and a text barrage from Jim I drunkenly had entered the world of eating when running and buying rucksacks to run with, the world had gone mad and this was before Brexit and the American election !!

so after ignoring the forthcoming race for all the summer and just concentrating on the London, Edinburgh and Glasgow marathons I remembered I had this 33 miler to consider, so slight panic set in, this included buying not one but two rucksacks with only three weeks to go and running two random 16 mile long runs one of which included eating flap jacks in a derelict ruin the other side of Ayr beach, the lack of preparation and understanding took a further twist the week before the run as I stood in Tesco’s wondering what to take on the run to eat, I had only eaten a single Co-op flapjack two weeks earlier, however I had a large rucksack to fill plus four bag drops so I left about £50 poorer with gels, protein bars at £2.50 each!!, ready salted French fries, M&M’s, salted peanuts, various haribo, Lucozade, water, red bull and some beer for when I got home !!

After travelling up the night before collecting our race numbers and dropping off the huge drop bags a quick meal early night and  an early 6.15 alarm call it was time to try and eat porridge drink tea and head to the village centre of Kilin

This is where you started to feel the difference to marathons, here there was no one doing warm ups or hefty stretching, all were wrapped up with 33 miles to get warm, after a brief from the race director we were off to the sound of bagpipes, I said good luck to Jim and Dave and promised I would try to be back before dark, which to be honest was my concern, so with long sleeve top, waterproof jacket, rucksack, gloves and England beanie we were off (obviously including shorts socks and trainers).

the race started with a run through the village before turning off and heading to the first climb at around mile 1 !!! The race settled into a walk when going up steep, run slow on small inclines, take advantage of the down hills and when knackered just keep moving.

It was great to run with some fellow ultra newbies and with some veterans who helped with tips including why have you so much stuff in your rucksack, you could hear everything juggling around, I should point here that everyone had those small racing packs, mine looked like I was going on a camping holiday,  though I think they also weren’t impressed with the amount of stopping I did to take photo’s the views were stunning with vista’s of lochs and forests all around, especially when I then caught back up telling them how lovely everything was and how easy this felt.

the run was going really well apart the food intake, the lack of preparation told and I just kept to Lucozade, water and gels in the main, anything you don’t want from your drop bags you can leave for other runners witch is a great touch and an easy way to save £50, after a really tough climb at miles 19 and 20 I realised if I kept running I could break six hours which was an hour quicker than I expected, so between miles 20 and 30 mentally I ran the Club’s 10 mile route the  freezing wind even added to the reality, so after the last check point and I quick drink of Red Bull, at this point I have to confess this was my first ever red bull with no added alcohol,( it won’t happen again), the last three miles were great, I new I would finish new it would be great time (for me) I busted out 8 minute miles ( don’t tell anyone it was downhill) and did receive a few weird looks sprinting these last few miles which also included stopping to put the club vest on over my waterproofs, into the village quick lap of the park and it was all over in 5hrs 45 mins, I could not believe I had done it, enjoyed it and finished in under six hours, so will I do another one, today as the body aches it’s a no but you never know !

Dave and Jim had a last two mile sprint which I hear was epic with the clubs Ultra champion prevailing, official results will be posted when available 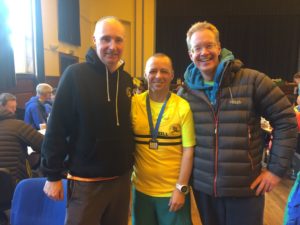 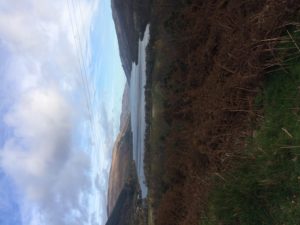 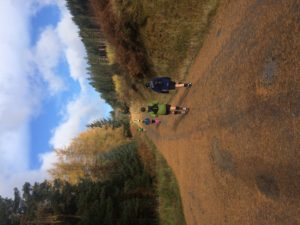 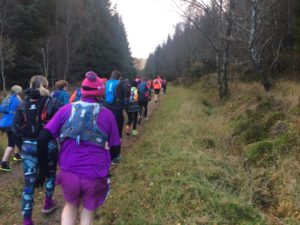