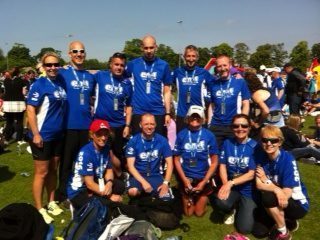 Last year the club marathon event saw Troon head to Manchester for the 2015 Marathon this years we were a little closer to home as we headed to the 2016 Edinburgh Marathon running festival, with the club represented in the full marathon, half marathon and the relay race.

After a very early start and morning breakfast it was time to head to Ingliston tram park & ride and the final leg of the journey into the city centre, with Sharon and Murray running the half marathon they had an even earlier start with this race starting at 9am an hour before the full marathon and relay.

The half marathon runners were lucky with the weather as there was a cooler feel to the early morning however once the marathon and relay started the clouds started to break and once we were two hours into the run the clouds broke and it became very warm, the route is pretty much un-changed from previous years and despite being called The Edinburgh Marathon it seems the city cant wait to get you out of the city centre and onto the back roads, after running past the Edinburgh City FC ground and then skirting Hibs football ground it was a bit of a slog until you hit the beach front where the views and welcome breeze brightened things up, the support was a bit hit and miss with large sections missing support but where there was support it was loud and welcomed, personally after running London a few weeks ago I as expected found the last 5k pretty tough, but there were lots of ‘touch here for power’ boards to help me to the finish.

The meet and greet area was good with plenty of food & drink places and importantly space to recover and admire the pretty darn good medal !!

All the Tortoises managed to meet up after-words where suntans and stories were shared over a couple of beers and Lucozade’s, a great day out.